A platform that they have to code the class twice for and that won’t be supported in 7 months?

Gee I wonder why. this annoys me, exact same background and image but with different text, and you cant even scroll to view the whole of the middle news popup thing at once

The purpose is clear.

They’re not spending any additional effort on flash at all.

The character is in the Flash client; you can collect lutes, you can see them in action including their effects, and the ability affects you. Everything for it is in the client, they just haven’t added it to the new char screen, and don’t let you select it from your list of chars.

So, yeah, it is meant to drive players to Unity. But it is COMPLETELY THE WRONG WAY TO DO IT. If they want more people to switch to Unity they should FINISH THE CLIENT. Fix all the bugs, finish the ugly placeholder UI, take out whatever is making it slow as molasses.

Adding a new class is exactly the wrong thing to do as it just distracts from actually finishing Unity. All that effort adding new content, testing it, and now two or three rounds of fixing bugs with the new class. Sure the only deadline is the end of the year, but now it’s out it would be better for everyone if they get the Unity client finished so they can switch off Flash support for good.

So apparently you can’t play on any of your characters on flash if you have a bard alive? 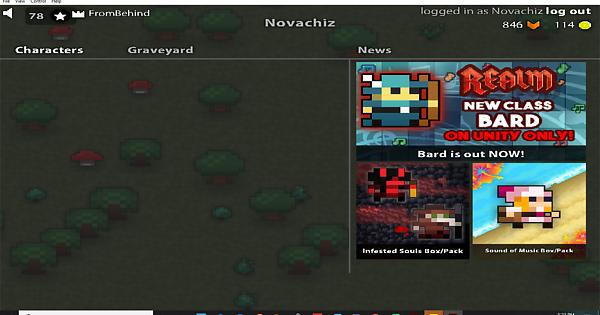 Honestly, until I have a chara slot open, I might do that… I love Exalt, but the Oops Removed BY Host 001 is getting to me

It worked for me just fine yesterday

The original Reddit patch notes got an update on 21st May after a “hotfix”, though the game version remains X.34.0.0:

Note: The new Bard class is available only on Realm Exalt (Unity) ! This is an awesome feature as far as I’ve been experiencing, it takes away a ton of annoyance at going into the fullest realms.

As long as you can not finish orxy castle nor can play for more than 10 mins without a DC, exalt is an early beta and should have nothing exclusive to it

A before and after comparison:

Recolouring annoys me way more than reshaping, so I’m mostly onboard, the new Eastern Winds is the only one I am not very keen about because I use that as my main wakizashi and it’s now a bit too similar to the Ronin’s and Fractured Gemstone, I liked the flatter blue of the old one more.

Sadly the white fluid projectiles were replaced by an eggplant sprite

What has happened with this game…

They really should have used the brown/orange in the original sprite for the main color of the sheath, as it is now it definitely looks too similar to at least the fractured gemstone waki.

Here’s what it looks like if I literally just take the brown from the original sprite and use it in the new one:

Here’s kind of what it would look like if it more or less used the original colors:

You’re free to make the edit, the sheath is that lighter shade of blue on the original sprite, and I wanted to stick to the original colors. It is what it is.