Edit: most of the work is being done on the discord now: https://discord.gg/yWD2Vp5bFF

I’m very confident the next step is to find Craig in the Sprite World (since that’s his home, and he’s not “on the clock”) and type numbers or something in chat, but I’ve seen it documented an entire one (1) time the entire day. I tried doing Sprites for an hour (ez campaign points) but wasn’t able to get him from pure RNG so idk how he spawns good luck.

Maybe it has something to do with summons ?

this is plausible maybe? The sprite mace could be used somewhere as it has a connection, similar to how you had to use bee helm to access inner workings.

Has anyone consulted the almighty, all seeing eye yet ?

not to my knowledge, feel free to try.

anyone going to check the haunted cemetery? there definitely has to be something there

I tried but got griefed by people saying Ready too early. check the previous thread The Inner Workings machine secret!

Niegil told me to post this here. Basically, I read all of the in-game lore, and upon hearing about the math room, this was my lead:
“Craig is a sprite who left the Sprite World in search of a new life. His true name is over ten thousand letters long, but it’s pronounced exactly like “Craig,” so the name stuck.
His internship is filled with misfortune as he often suffers from Oryx’s drunken decisions, like when his residence was randomly rebuilt into Oryx’s new court.
In spite of his misgivings, he is optimistic about his career choice, yet somehow blissfully naive towards his boss’s conquest of the realm.”
As such, I gravitated towards the court, not the sprite world. I tried about 50 different keywords in the court, but to no avail. Perhaps there’s a specific cemetery one; maybe some clues are lying in Skuld’s fight. I’m going to check there next

Didn’t think this was related until the most recent post on it, some new enemy in reworked ddocks 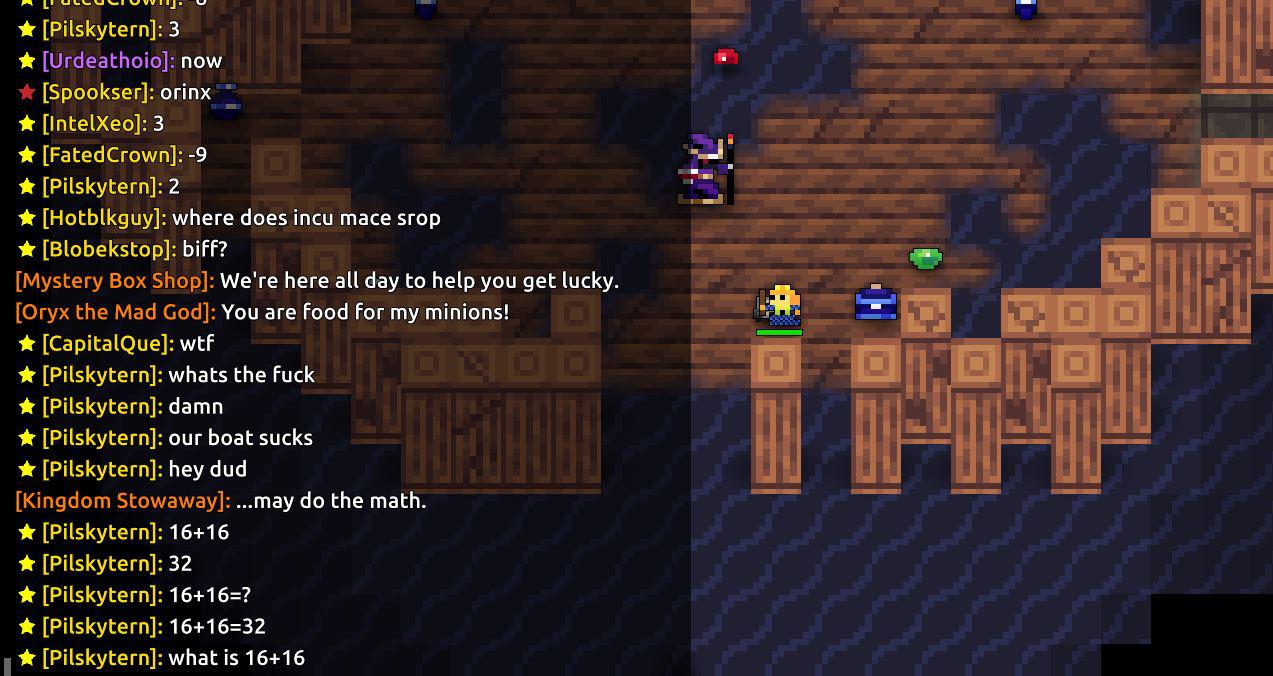 I also tried quite a lot of keywords in court a while back. nothing seems to work

We tried to tell everything to skuld, nothing worked.

Maybe we need to tell “number 32” to that stowaway guy

Please note that we didn’t try sprite mace in skuld at all, so that is yet to be tested. ayo what abt the books that drop from the monkeys in the ddocks rework?
(reddit link if you’re confused abt what I’m talking abt https://www.reddit.com/r/RotMG/comments/mgf78f/i_found_some_lore_d/)

those are probably related then aswell. people seem to think that the kingdom stowaway is a shatters reference, maybe there could be something there aswell? kk so here’s my plan: we either get in contact with the person who got the books, or we farm ddocks till someone gets the books