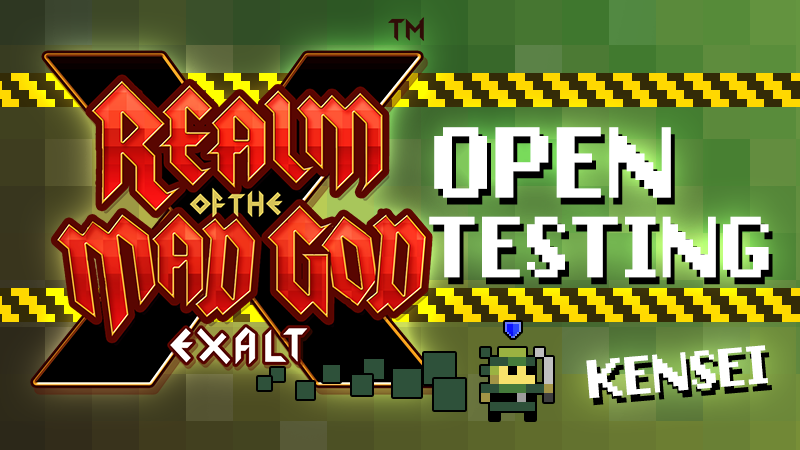 Hello Realmers,  We are happy to open up our testing servers and let you meet the newest member of our family: the Kensei.  Please take into consideration that you’ll need a different account for testing. If you haven’t already created one, make sure...

My own thoughts after briefly testing it. Seems pretty OP. Heavy armour with a DEF bonus on the ability (+6 on the t6 I was using) makes it close to Warrior in DEF, but at Katana range. And you get a brief burst of invulnerable each time you use the ability.

The ability is odd. A bit like the Trix, except you don’t teleport but rush forward, invulnerable as you go and doing damage. You have much more limited control over where you go – basically a fixed distance forward – and there’s no decoy. Like Trix I think it will take some getting used to. It’s going to be hard to use in many battles against single stationary enemies, where the motion might put you on top of them.

There other odd aspect to it is the way it’s triggered. Press space once and a ‘3’ appears on screen. These are your three uses of the ability, so you get to use it three times before again using space to get a ‘3’ up again.

In practice you will just get in a rhythm of pressing space 4 times for 3 ability uses. There seems to be no time limit on it, so nothing to stop you scheduling the first space for when you are away from combat.

The number one issue is the spammability and the invulnerable. Remove both and I think it’s a good and balanced class.

It is incredibly clear that this class is unbalanced. The dash invalidates all rushable content in the game easily. In boss fights, the class is fairly mediocre and doesn’t feel all that great to play to me. The trail damage is extremely precise and hard to hit, while the sheathes that fire projectiles are either extremely hard to hit (dammah knife style sheathe/ ep shots) or do a fairly small amount of damage for the annoyance of using the ability in bosses (have to aim weirdly to not dash onto the boss, or miss shots by dashing over).

In order to fix these issues, I think the ability needs a fairly long delay before ability can be recharged when you run out of charges OR your charge time expires. This shuts down the insane spammability of the class and means you can’t just rely on invulnerable dashing through every shot. In order to fix the weirdness of projectiles, I think they should spawn as soon as the dash starts instead of at the end. This allows you to hit your projectiles when you dash over something instead of having to dash in front of it. I also think the trail could have it’s aoe expanded slightly to make it easier to hit.

Tiered sheathes are also quite underwhelming compared to the uts, since they for the most part serve the same purpose of dealing damage and the UTs do it better.

The other thing on this testing that I think needs to be addressed is the ST set. This set laughs in the face of item balancing. The katana has absurd dps (~500 dps higher than enforcer AT 0 DEF) and can be pattern changed to give a ~3 tile range. The set bonus is absurd (30 dex is crazy good, especially given that there are no abilities that grant dps stats). The armor has incredible survivability to the point of replacing basically every other survivability armor. The katana is the biggest offender here (if you don’t believe me, here’s a mundane void solo). If the pattern couldn’t be changed, it would be a lot less op, but as it stands this makes every other katana almost useless.

One final thing that I think is a bit weird is the behavior of the class with various status effects. The effects of quiet and silence should be swapped, and petrify should not disallow ability uses or cancel current charges.

Edit - One thing I forgot to mention is liquid damage. You can instakill yourself by dashing through damaging liquid which is extremely stupid. Hopefully deca takes the opportunity to allow invuln to affect liquids as well.

The dash invalidates all rushable content in the game easily

The set bonus is absurd (30 dex

instakill yourself by dashing through damaging liquid which is extremely stupid

kensei is incredibly fun to use

a class with such high invul uptime is definitely difficult to balance. here are my thoughts:

a possibility is to make the dash give invincible instead of invulnerable. this would mean kensei can dash over liquids, but also makes it a lot less safe as it’s possible to be hit by the bullets you dashed over if you land on them (i think thats how invincible works?), making the player think more about where they’ll end up if they dash.

health/mana text popups seem to be broken. hope this will be fixed

This topic was automatically closed after 30 days. New replies are no longer allowed.