It’s time to kick the Reconstruction up a notch! Your hard work and dedication in gathering nails, screws, and planks has accumulated enough materials for the next stage of the Realm rework. Listed in these patch notes you will find the new features and improvements we were able to come up with for the second phase of Month of the Mad God!

We know you’ve been waiting for this one! Starting with today’s release, you will notice quite a change when entering your Vault. The first thing you will see, along with the updated aesthetics, is that all your vault chests have been rolled into one . Don’t worry, all your belongings are still in there!

You would no longer have to cycle from chest to chest anymore. With all your items at the same place and thanks to the search and filtering options in the new Vault UI, it will now be easier and faster than ever to find what you’re looking for. The same goes for the Gift Chest too !

In addition to the above, the Premium Vault is now available for you to store your potions in. Not only will it be easier to access them, but this way you will also have more slots available in your Vault for the rest of your items.

Players start with 16 available Premium Vault slots and are able to expand to 64 total slots at first. After that an upgrade is available to a total of 128 slots, then 192 slots. The last tier of expansion grants 256 total slots for your potions. Each upgrade would cost 500 gold with a maximum of 2000 for the most amount of slots, so the higher the tier the more value you get in terms of slots increase.

As you may know, this month we will be making significant changes to the overall XP and fame system. The goal of redoing this deeply outdated system is to give players more options to obtain fame (both alive and dead) as well as provide a better sense of progression throughout a character’s life.

As a first step for this update, we have updated XP values across the game to create a more consistent curve. That means the majority of dungeon enemies, bosses, and encounters have received a major XP buff which will make alive fame easier to earn than before. We’ve also increased the Quest XP Multiplier — which allows quests to give more XP than the level cap normally allows — from 1.6 times to 2 times. This should make levelling faster and more consistent overall.

Another aspect that’s coming with this update is equipment’s fame bonus has been replaced with a passive XP bonus . This means that equipment bonus will now increase the amount of XP you get for every monster kill while equipped, rather than be a part of the fame bonuses at death. Because of this, we’ve removed the Well Equipped fame bonus ahead of the full fame bonus rework.

The final part of the fame rework we are adding today is a brand new dungeon completion system , similar to Exaltations. The completion of a dungeon will now be based on a boss kill rather than exiting the portal. Just like Exaltations, you will need to deal soulbound damage for the kill to be counted (which is practically any amount of damage). We’ve made a few minor behind the scenes adjustments to some dungeons to make sure they work with the new system.

We hope you enjoy the additions we are bringing to you today and are looking forward to the remaining fame changes coming later this month! If you’re eager to get more info ahead of time on the fame bonus rework, check out last week’s blog if you haven’t already!

Last but not least, keep on gathering reconstruction materials. As always, there is a lot more to come in the future. For starters, watch out for the High Tech Terror dungeon gates opening soon.

Important: We are aware of some visual glitches after the release. We are already working on a solution to your reports of missing items. A hotfix is on the way for disconnection issues that occurred after the release.

This is one of my favorite updates as of now! The vault changes are going to be so useful (can’t wait to play around with the premium vault [the price for it isn’t as bad as I though it would be for slots tbh]), and the XP re-balances look delicious! I’m happy with having fame bonus being replaced with a XP bonus on equipment. Makes sense tbh with how many new fame bonuses they are adding.

Everybody remember your free pack as well: did anyone lose everything in their gift chests?

did anyone lose everything in their gift chests?

I personally didn’t, but it sounds like a few people did.

After playing around with the vault quite a bit, I have to say I love it! Very easy to navigate and is set up quite well. My only real complaint is about adding new items. It seems to me that the only way to add items right now is to go to the “Customize” organization tab, unless if I am missing something (probably did since I only had a few minutes in between classes to look).

Already having an issue with one of my pots in my regular vault. I can’t take the pot out of the vault, it reverts to back in my vault after I drag it out. Restarted game and still won’t let me take it out lol

Duping with the new vault system already? Not surprised I guess.

Holy! That’s quite a bit of fame lol. Already having an issue with one of my pots in my regular vault. I can’t take the pot out of the vault, it reverts to back in my vault after I drag it out. Restarted game and still won’t let me take it out lol

Secret area in vault. I really like the update so far!

that’s been there for 10 years

This might explain why a random discord account pm’d me trying to get me to do some duping scam, I don’t know what.

Yep I think I’ve been banned for duping that mana pot (joking lol) I’m now having another error, after restarting my game again I get this weird message Have they fixed the bug where, if you’re hovering your cursor on your character while you got sent to the realm, the character display doesn’t go away?

I thought the game was talking in first person for a moment there, than I realized it was just the word ‘will’ cut off

I go into maintenance mode

My only real complaint is about adding new items. It seems to me that the only way to add items right now is to go to the “Customize” organization tab, unless if I am missing something (probably did since I only had a few minutes in between classes to look). 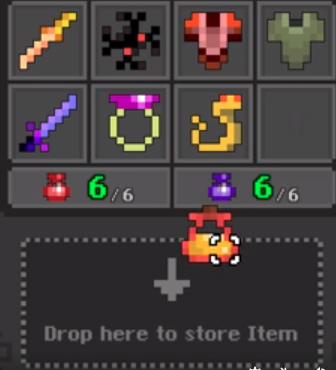