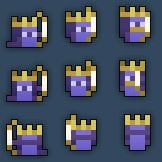 We have quite a few changes and improvements for you today! Some small ones like tooltips and inconsistencies that have been bugging you and us for a while now. Some big ones like changes on Oryx 3 and his loyal followers. We have those and a little something at the end, so keep reading and we hope you enjoy this update!

Balancing improvements on Archbishop Leucoryx, Chancellor Dammah, Chief Beisa, and the Mad God himself, Oryx 3, as well as much bigger changes to Treasurer Gemsbok.

On the first day of every month, starting September 1st, all nitro boosters will receive gold based on how long they have been boosting the server (including before this announcement). The rewards go as follows:

BUT! If you ever stop boosting the server, you will be reset back to 100 gold if you start boosting again. Additionally, boosting more than once will have no effect.

We will currently only limit 100 people to be able to earn gold through nitro boosting. If you boost after there are already 100 boosters on the server, you won’t receive any gold reward.

Important! Nitro boosters must link their account to be eligible for gold - you can link your account in #bot-channel using !link <ign>

@moderators Yeet this one in #news:developers-corner please!

i will put my epic reminder here too

Just a reminder on some existing issues that have been exacerbated with O3’s release.

Some of the effects used for Oryx 3 were only possible on Unity and we did not want to limit ourselves for what is intended to be an unrestricted, next-gen experience

It’s funny that they’d lie about the effects thing not being possible in Flash, though.

Some of the effects used for Oryx 3 were only possible on Unity and we did not want to limit ourselves for what is intended to be an unrestricted, next-gen experience

yeah kinda cringe they lied in the communities face (most of which are hackers or have a good understanding of hacks) and the fact that they thought they could get away with it. flash is dead but how far can you go deca? then again considering the obscene amounts of money ppl spend in this game

rng is getting better tho noice