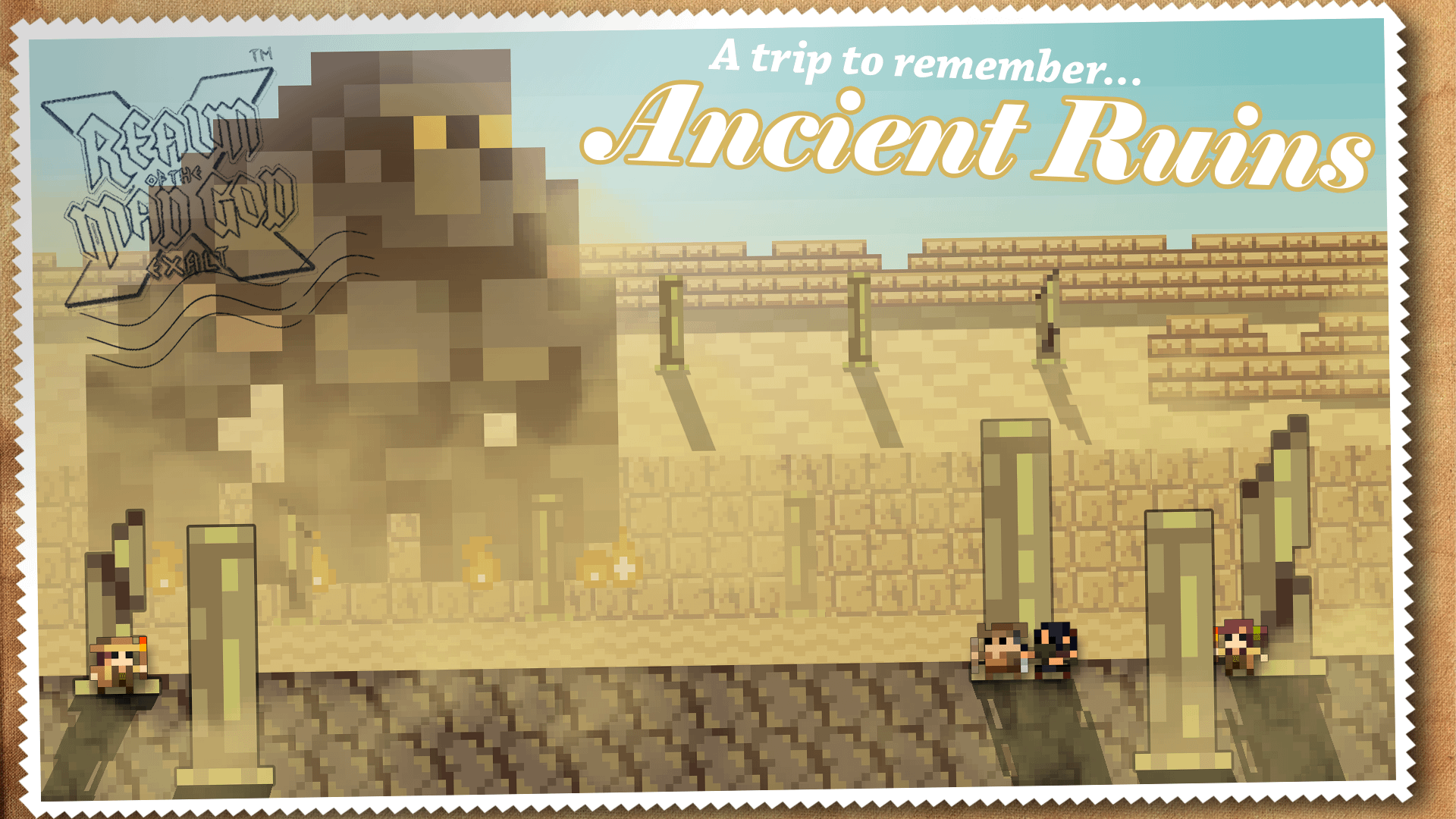 In the ancient times before Oryx had clawed his way to absolute power, others sought the same might through one method or another. Buried deep within the Realm’s barren deserts lay vast ruins. Once built to summon and harness the power of another plane, it soon was home to an army of inanimate warriors, powerful constructs, and long-dormant spirits. But the spirits grew vengeful for their imprisonment, and soon calamity struck. The shrine was entirely annihilated, with the formerly imprisoned spirits being the only remaining alive. The shrine was abandoned, left to decay to the sands of time.

But now the ruins have been discovered. Overrun with wildlife, engulfed by sand, and monitored by the spirits that once ravaged it, remnants of the shrine’s history still remain. They are determined to eliminate all those who seek to know the answers of its past. Though the acquired knowledge from ancient times had unknowingly escaped, and this would not be the last time spirits were abused for warfare…

The Ancient Ruins bring you some new items and a special juice that will quench your thirst. Nothing’s quenchier. It’s the quenchiest!

Note: We also added the Sand Wanderer Trickster Skin as bonus loot! It will drop from the Sandstone Titan and the Genie. The Ancient Ruins Key was also added to the Epic Mystery Key.

Cool. It’s finally out! But, does anyone actually know what the dungeon drops from? Cool. It’s finally out! But, does anyone actually know what the dungeon drops from?

I just realize something with HP scaling.

So I found out that for Limon’s HP scaling formula (will be change in future):

N is how many players in a dungeon/realm. So if I am raid Sprite with another player, the goddess would have 10,800 HP instead.

That formula applies to all bosses except Oryx’s 3 enemies.

B is boss’s base HP

N is how many players are on a realm/dungeon.

S is his/her HP scaling (not percentage) like Limon’s scaling is additional 1,800 HP per additional player.

side note, more than one troom can spawn in the ruins and it supports multiple bars, gets cluttered though.

This update would be great if i could even access it on steam.

???
I use steam and have no problems accessing it. Also, the QoL changes are finally here! I love the look of the dungeon and am happy for Sturky that they got it in the game! (I want to try it when I can get on a computer again.)

I can do ruins on flash but exalt won’t let me enter any realm, tells me to update but everything is already updated.

Edit: It fixed itself the next day.

I will say after playing a few minutes I think that the transparency slider was a good move for players but a financial mistake for Deca games.

I fully expect this to have an impact on skin sales, as I can barely make out what other people have on at 50% (and lots of players are editing that visibility down to 25%). In my personal opinion the charm of a player/pet skin was being able to show it off and that goes away with the update.

I’m in favor of the change, but I really think that it highlights why Deca should be very cautious about giving into the community.

I would also like to point out that I specifically predicted that Deca plans to meet the community “half way” when it comes to proposed changes. As a result, it does not surprise me at all that people are already clamoring that the 50% opacity is not sufficient ant trying to modify their clients already. Honestly I would view this as cheating (regardless of whether Deca will ban players or not) because it is specifically accessing an unintended mechanic. Deca did not intend for people to have lower than 50% opacity.

I think the Boss HP bar is a good idea, but I would like the option to turn it off (edit: I found the option) as it makes me panic and think for a second that my own HP is dropping rapidly. Multiple bars can also clutter the screen.

I will be interested to see if Deca allows further opacity options. I agree that 50% seems like a strange number to stop at. Not really enough to take away all of the problems with crowds, but enough that you can’t make out skins. I really wish there was a separate toggle for pets. I don’t want to see other player’s pets AT ALL. They are worse than the players most of the time!

The gravestones make the fight feel special to me, in a way. Like they are now a monument and part of the dungeon until we leave, kind of thing. Having them affected by opacity, while I understand that it could be valuable (especially in those early few days of O3), is not something I would choose, personally.

Also, did my first Ruins, and I love what I am seeing so far! Kind of hard to hunt one down on purpose, but I suppose for leveling players they will actually get those enemies as quests so it should be pretty good. Great work on this update, Deca!

I agree. I saw a couple of the pictures on the White Bag thread, and although I could certainly live with how the chars and their pets look, the gravestones stuck out like a sore thumb. They felt far less special, and I think you covered it well, @Furyborn. I’m not sure that DECA would want everything completely off, but I do like the idea of toggling between different things for different opacities.

Seems they added another change that isn’t listed (unless I’m missing it), that is with the player HP/MP bars being “drained” by showing a white overlaid bar instead of just instantaneously going to the new HP value. I find this incredibly annoying when taking multiple shots. Does anyone know if this is toggle-able in the options somehow?

Great observation, the skin sales didn’t even occur to me. Rogues feel way out of place now and big groups to me felt like an actual ‘raid’ was taking place, coming together to kill something bigger than us and I sorta feel like a part of that was taken away with transparency. Just my opinion, not anti-deca at all; just wish they gave more thought into it

That bar thing is admittedly distracting my sister loves it, but it’ll take some getting used to part.

Uh, guys in general worried about the opacity, though? Not to e rude, but you know you don’t have to use that setting, right? Pick your poison, if that is how you view it. :3

New dungeon!
The ruins seem fun, the slowing enemies stacking with sand make it annoying to rush, but it’s not meant for maxed characters ignoring and tanking attacks anyways.
I think the boss fights are fun too. I haven’t tried it with an unmaxed character yet so I don’t know what the difficulty is like, but the phases seem interesting, more engaging than fights with mostly stationary and predictable bosses. I think it’s neat that the troom can be different with different attacks too.

I haven’t gotten my hands on a rapier yet, but I like how the seal is decidedly worse than other seals from harder dungeons, while still being usable at higher levels because the vit boost can be used alongside other seals in a group

Transparency
Finally.
I see a lot of people complaining that the 50% (or less with regedit) minimum is too high, and while I do think people should be able to lower it to 0% if they prefer, I’m pretty happy with how visible my character is now. 50% sounds like it’s not a lot, but combined with my character rendering over everyone else I’ve had no problem seeing enemy shots.

I’m not actually worried about this affecting skin/pet skin sales because it’s disabled in the nexus (read: flex central), and I’m sure not everyone buys skins just to look good for others - I personally wear my skins for myself, not anyone else

Here are the changes I’d make to the system, if my uncle was deca

Boss hp bars
I like the look a lot, though there are a bunch of bugs/unpolished areas

One cool thing is that because the hp bars show the bosses precise health, we should be able to figure out the adaptive scaling hp formula, or at least approximate it

hp/mp drain white bar
I like this more than I initially thought I would. When I first noticed it I figured it would make me think my hp was higher than it was and cause a bunch of deaths (and to be fair, it does make my exact health harder to gauge with peripheral vision), but I’ve found that the sudden change in color helps me figure out when I’m losing health - when there are a bunch of damage numbers above my head I have a hard time figuring out just how much I’m taking, but the new bar has helped with that

B is boss’s base HP

N is how many players are on a realm/dungeon.

S is his/her HP scaling (not percentage) like Limon’s scaling is additional 1,800 HP per additional player. I was right. For some reason the Wiki did not clarify enough. The HP increase was meant for additional player in Dungeon instead of per player.

If we used the HP scaling formula to calculate Janus’s total HP with 61 players:

Do the math yourself. Again the formula will be changed in the near future.

@DecaUnibro
Is there any way we can get a toggle-switch in the options to disable the player hp/mp white-bar drain aesthetics?