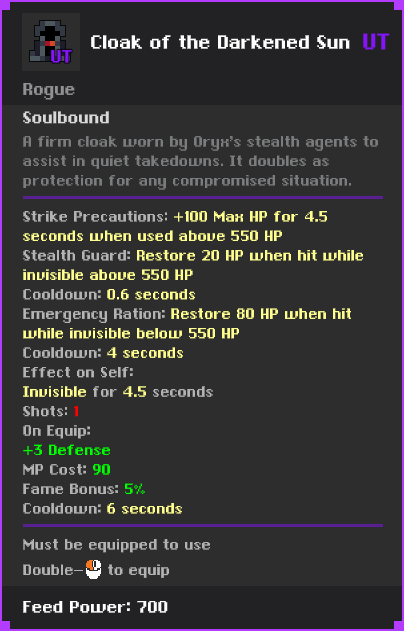 After a rough patch with the Bard release last week, we are ready to make more improvements and fixes to both Realm and Realm Exalt. We have something special for you, something that you’ve all been asking for awhile now! Check what that is and more, below:

To apply changes players need to close the client and launcher then re-open to download new launcher and client via launcher again.

Introducing the Shard of the Intern! With a stack of those, you will be able to get one of the new Agent of Oryx abilities! Here’s a few neat tidbits about the early concepts of the abilities i made, by the way!

Prism of Shattered Light: This was the first one I started working on. I honestly didn’t have too clear of a vision of what I wanted to do with it initially, but I did want some focus on the decoy. It used to give only +10 attack on use, and the invis would only kick in when below a meager 300 HP - you’ve got Deca to thank for actually upping that =w=".
The speed was also added on the later side, since the loss of teleport was somefin to certainly take into account.

Tome of the Tarnished Gods: With this one I had a clearer goal in mind: it was going to heal, but only when you were low on HP. One of the first iterations gave a defense boost when used above, like, 550 HP or so, and a 350 HP heal when you were below 500 HP.
Because of the way I formatted it in the XML, however, if you got the heal to activate between 500 and 550 HP (or somefin like that, this might’ve only started happening later), you got both buffs - since you’d be at, say, 520, then get healed, be above 550, and then get the def boost.

I eventually decided to use an Orb for the first activate, and later on replaced the self-heal with a healing Orb. Initially, I wanted them to use AoEs for the damage and heal, but that’s currently not possible, so I had to stick to Zap and HealZap.

Cloak of the Darkened Sun: Another fun new tool we got to use was the parameter requiredConditions. This is basically what it says - it only uses the Activate if you’ve got a specific condition effect(s). So, obviously, I really wanted to make a cloak that emphasized on it.
The first version was a hybrid between the Mad God Cloak and Bloody Surprises: it gave +15 attack when used above 450 HP or so, +15 speed if below 450 HP, and +15 def if you were hit while invisible (all with 4.5 secs of duration, the same length as the invis time).

Eventually I decided to drop those buffs altogether, as it was a bit too infringing on Bloody Surprises’ niche. Instead, I made it heal you, which ended up being quite fun. The cooldown of said heals were also drastically lowered later on, but the major heal one got reverted, sadly.
The Max HP boost was a bit of an afterthought - something to at least give it an edge, even if you weren’t really getting hit. After adding it and playing around, I wanted to make it last a bit longer than the invisibility, but Kidd was already happy with the equal duration, so here we are .w.

I fucking hate the prismimic. The idea of getting all of those items without having to even DO THE DUNGEONS THEY ARE SUPPOSED TO DROP IN is absolutely repulsive. This game is pointless enough even without the dungeons a lot of players run the most being completely undesirable. Good thing they wouldn’t put endgame items in a prismimc, THAT would be just silly

Issue with unsent text disappearing when clicking away from chat was fixed.

Finally. So annoying when you stop typing mid-way and have to say everything all over again

I don’t dislike the rng items really. I don’t understand the issue with them but that’s my perspective. I do, however, think that the prismimic or whatever event does encourage people not to do the dungeons. My view is that the realm should be the main source of events etc. O2 does provide some of this Please, Deca, don’t ever give Oryx keys lol.

Yup! Actually it seems more lax than it originally was

Prism of Shattered Light : This was the first one I started working on. I honestly didn’t have too clear of a vision of what I wanted to do with it initially, but I did want some focus on the decoy. It used to give only +10 attack on use, and the invis would only kick in when below a meager 300 HP - you’ve got Deca to thank for actually upping that =w=".
The speed was also added on the later side, since the loss of teleport was somefin to certainly take into account.

I actually love the Prism. It’s really good for luring bosses’ shots away from you, especially the ones that give chase because of the speed and direction the decoy goes. Not only that but if you managed to trigger the invisibility proc, you have a bigger window to change Prisms and teleport to safety. The Atk buff is just the cherry on top, very rewarding if you’re good at positioning yourself. Glad that the event offers a route to the items through Tinkerer.

The idea of getting all of those items without having to even DO THE DUNGEONS THEY ARE SUPPOSED TO DROP IN is absolutely repulsive.

I guess this is like one of those purist/radical arguments. For me it doesn’t matter much at all, and I think many players don’t care about the source of the item; only being able to get the item by any means. Recalling back to the unsb times the game let you earn items without doing only one dungeon on repeat, so compared to that Prismimic is nothing too crazy. Just a dungeon equivalent of the Keyper in that respect.

Just a dungeon equivalent of the Keyper in that respect.

Consider this - event whites are far rarer than the low-mid tier whites the prismmimic offers.

I wasn’t really referring to the rarity of said items, just that the metaphorical slot machine of random items is significantly more accessible through keys.

While it is, the items are worth less, if you get my meaning

Seems there was a problem with the game throwing “temporary banned” messages during the Prismimic event, on 5th June (7 days ago), interfering with some players being able to participate.

There was a Deca response on Reddit at the time, copying here for history’s sake.

We are aware of the popup message some of you are getting about being banned. In case you were playing earlier today and suddenly got that message, your account is not banned. We are currently working on fixing this issue and we apologize for the inconvenience!

And when resolved, edited (6 days ago) to add a line:

This issue has been fixed! Thank you all for your patience and understanding!

Possibly won’t have any consequence for the event itself, if they’re already planning to repeat the Shard of the Intern appearing in future events, like what happened with Shards of Doorwarden & Mad God, and they’ve mentioned in a blog post about other locations being used.

You’ll have to head over to the official RotMG Discord or #game-discussion:tech-support for specific advice for that.