Why don’t you make those if you want them so badly?

How should I make references when I have literally zero influence on whats in the game?

Here are some pictures for reference: Link from the “The legends of Zelda” series

A night elf from WoW/Hearthstone

Lil bopeep from that kids song

Mad hatter from Alice in the wonderland

Here are some pictures for reference: Robe of the Tlatoani and

Tlatoani’s Shroud refer to the Aztec term for “ruler”.

Ring of Decades refers to DECA Games. They released this ring after they took RotMG over from Kabam.

The item descriptions of the Paranormal Wizard Set refers to/parodies the lyrics to Monster Mash.

The item descriptions of the Reanimated Archer Set refers to/parodies the lyrics to Spooky Scary Skeletons.

Davy Jones’s Locker (as well as the boss and items he drops), refers to the identically named superstition.

The bosses in Tomb of the Ancients refer to Egyptian deities: Bes, Nut, and Geb.

The Raijin Disciple Set refers to the Raijin, Japanese god of lightning and thunder.

The Bronze, Silver, and Gold medals refer to the Olympic Games.

Stheno the Snake Queen refers to Stheno from Greek mythology.

Dirk of Cronus refers to a series of events that took place during the Wild Shadow era.

Battle for the Nexus refers to SwatSecOne taking control of an admin account and spawning enemies in the nexus. As well, the items dropped in the dungeon refer to previous RotMG GMs and devs.

Staff of Yuletide Carols’ description refers to the lyrics of Deck the Halls.

Skull-splitter Sword looks oddly similar to a tattoo seen in The Simpsons.

Master Rat in Toxic Sewers is a reference to Teenage Mutant Ninja Turtles.

Fairies in Magic Woods are named after default player names for new players.

Enemies in The Machine are named after the RotMG game servers.

Janus the Doorwarden refers to Janus from Roman mythology.

I believe this refers to “Big Brother is watching you” from 1984.

Refers to “I’ll be back”, a quote from The Terminator.

Refers to Monkey King aka Sun Wukong in Chinese legend.

Description refers to an old proverb.

Description refers to lyrics of I Will Survive by Gloria Gaynor.

The Light Cavalry Warrior skin is likely a reference to the poem, The Charge of the Light Brigade, especially suggested by the words from the description “…charging fearlessly to their grave.”

There are some good ones here, idk who you want to give the credit to

I’ve recently noticed a bunch of the bosses/NPCs are named with a nod to mythology, history, and pop culture. For example: Lord Ruthven - Lord Ruthven was one of the first vampires to appear in English literature. Mixcoatl the Masked God - Mixcoatl was the Aztec god of war. The Grand Sphinx - Based off the Sphinx at Giza. Bes, Nut, and Geb - Egyptian god/godesses of protection, sky, and earth respectively. Thessal the Mermaid Goddess - Based off the Greek myth of Thessalonike, a Macedonian pri…

This is actually a reference to Veigar from League of Legends

Now here’s a thread I can get into!

Azula from Avatar the Last Airbender

The name, El Dorado, literally translates from Spanish to ‘The Golden One’. The term was used by Spanish conquistadors to describe a mythical ‘city of gold’ in the New World. The boss itself is a reference to the ark of the covenant from Indiana Jones, the realmeye prompt for El Dorado noting that ‘the first tribesman who touched it died instantly,’ a reference to how anyone who touched the ark in the Bible died instantly.

While the Secluded Thicket in general is meant to have an Indiana Jones vibe to it, the interpretation of El Dorado seen in-game is actually more directly meant as a reference to the El Dorado sarcophagus in the first Uncharted game.

The Magmatic Mystic’s description references Captain Magma, from Spongebob, and how he shouts “KRAKATOA” to fire off a spurt of magma.

So glad someone caught that.

So glad someone caught that.

I have a very specific type of memory, wherein I can vividly remember very specific memories - “Snapshots” moreso - and one of them is of a meme which is a screenshot of that gif, except with a title “When you’re asked to calculate the length of a triangle” (or somefin like that) and edited to say “Solcaltoa!”
So, uh, I guess I was privileged there, hehe.

Is it the lod dragons being fire, earth, water, air, and all elements for ivory?

No, it’s more overt than that.

And also the basic elements aren’t really an original concept from either side.

Ooh ooh I know one.
Buster Katana is some reference to an anime dude with a big sword hold on I’ll find it. Cloud Strife (Japanese: クラウド・ストライフ, Hepburn: Kuraudo Sutoraifu) is a fictional character and the main protagonist of Square's (now Square Enix's) 1997 role-playing video game Final Fantasy VII and several of its sequels and spin-offs. In Final Fantasy VII, Cloud is a mercenary claiming to be formerly of SOLDIER, a group of elite supersoldiers employed by the Shinra Electric Power Company, a megacorporation responsible for draining the life from the planet. Fighting against Shinra in the resista... 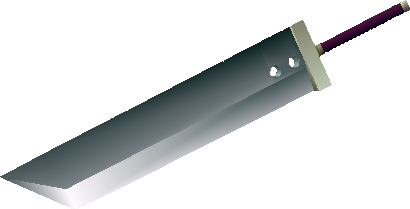 This sword is a symbol of my dreams... and my honor. No... it's more than that...Zack Fair The Buster Sword (バスターソード, Basutāsōdo?) is a weapon that first appeared in Final Fantasy VII and has since appeared in several other games in the series. It is...

Dungeons and Dragons in 1975

There’s probably a few D&D originated ideas, one that jumped out at me as seeming to be a clear homage/tribute/inspired-by was Cubes: A gelatinous cube is a fictional monster from the Dungeons & Dragons fantasy role-playing game. It is described as a ten-foot cube of transparent gelatinous ooze, which is able to absorb and digest organic matter. Oozes are relatively common antagonists in fantasy fiction; in addition to the oozes of Dungeons & Dragons, examples include the monster from the film The Blob, slime in Dragon Quest, and flan in Final Fantasy. These fictional oozes may have been inspired by microscopic organisms such ... This week's monster is clearly a rectangular prism.

And The Realm Eye of course a reference to here!

And The Realm Eye of course a reference to here!

What?! Clearly you didn’t read his flavor text back in the public testing thread.

@Toastrz Are the concentric square patterns in the Corruption Phantom room a reference to Fez?

A book curse was a widely employed method of discouraging the theft of manuscripts during the medieval period. The use of book curses dates back much further, to pre-Christian times, when the wrath of gods was invoked to protect books and scrolls. Usually invoking threat of excommunication, or anathema, the more creative and dramatic detail the better. Generally located in the first or last page of a volume as part of the colophon, these curses were often considered the only defense in protecti...

Is a bandwagon hop on the ‘Ugandan Knuckles’ meme:

[Screenshot (95)] A new age of pet skins :3 a glorious age in fact… your thoughts on this rotmg community (please note I am joking :>)

"Ugandan Knuckles" is the nickname given to a poorly drawn rendition of Knuckles, a companion character featured in the Sonic the Hedgehog video game franchise, as portrayed by YouTuber Gregzilla. The character gained online notoriety in January 2018...