No, you’re looking too far for what would even count as a “reference.” All the remaining stuff can still be connected with one step. Some of those steps are just very obtuse, and something you’d only consider even mildly suspicious with a very keen eye.

I’m turning into Mastertainment to your James Gunn…

Just some clarification regarding the rules (also will begin work on updating sheet and leaderboard in a bit):

I forgot to answer this question last night:

Some things, like hobbits from J. R. R. Tolkien’s The Hobbit/Lord of the Rings or beholders from Dungeons and Dragons, have become very generalized in fantasy or RPG tropes. Those are still technically copyrighted forms of media.

For things like those, that started out from one specific media but ended up becoming more of a general concept, I won’t award points unless it’s a reference to a specific depiction of it from some media (for example, the beholder in Realm doesn’t quite look the same as the beholder from D&D, so it might not be a reference specifically to D&D and just be using a well-known fantasy enemy. But maybe there is something out there that looks strikingly similar to the RotMG beholder that influence might have been taken from? Who knows). I think this is more or less consistent with how I’ve been giving out points, but if there’s an inconsistency somewhere in the point system let me know.

I changed my mind on this, I think I will count references such like that for points. The leaderboard has been retroactively updated.


Another question that was asked not in the thread, paraphrased: "Since Belladonna and deadly nightshade counted as a reference, what about things like lamps in RotMG referencing lamps IRL for example?" My answer to that is that "trivial" references to real life objects aren't counted. As an example, sand in the Realm is technically referencing sand in real life. But it's a trivial reference. It doesn't serve as cool trivia, it doesn't play with the concept of sand, it's just literally the real-life concept of sand but applied to RotMG to serve as a ground tile because they needed something there. However, the deadly nightshade plant in real life was not made by Dr. Terrible, nor does it fire its berries at you or summon insta-pop buds. It draws ideas from the deadly nightshade plant in real life, but it's not a 1:1 translation. There's also the subjective meter of how obscure something is. Pretty much everyone knows what sand is. Not everyone has heard of the deadly nightshade. This is a bit hard to describe but hopefully you get the gist, I wasn't expecting people to dig at the edge cases so much but that's alright.

There are some good ones here, idk who you want to give the credit to

RotMG names a lot of its NPCs in cool ways

ok @IYN is getting entered into the leaderboard whether he wants to be there or not ,

Wait, what are these points even for? Bragging rights?

Uh yeah, just bragging rights. It’s just to kind of reward people for finding references/making a sort of game about it. Anyone is free to ignore the leaderboard thing if they want even, if they just want to find references and post them for fun.

A frozen person in an iceberg?

The two wizards Bill and Ted (no longer there) in the Shop refers to Bill & Ted. Highlighted dialogue refers to lyrics of Get Lucky. Highlighted dialogue refers to a classic line in literature. Highlighted dialogue refers to a proverb. References some common computer terms, such as 404, C:/ drive and command line commands, and Ctrl-Alt-Delete.

Highlighted dialogue refers to the meme/joke of Australia being upside down. 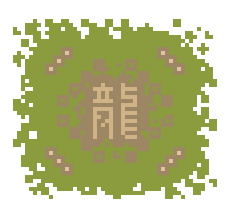 The contructs in godlands “were devised to be the embodiment of the concept behind the game, Rock, Paper, Scissors”.

Rainbow Road refers to a race course in Mario Kart.

Big Yeti (and Mini Yeti) refer to a creature in folklore.

In the Christmas nexus and Santa’s Workshop, there is a small figure of Wally from Where’s Wally.

The Deholder’s only attack is named “HyPEr rEalIsTIC BLoOd”, which is a play on the Mocking Spongebob meme.

Fire Blade’s description references the RotMG community’s common use of the fire sword as a good luck charm.

Alligator in toxic sewers is a reference to the popular urban legends of alligators living in sewers.

Basilisks in the Forbidden Jungle are references to creatures of the same name in European legends.

Ambrosia and its description is a reference to the food of the Greek gods of the same name.

Chocolate Cream Sandwich Cookie’s sprite is a reference to the Oreo cookie.

Rudolph the Berzerk skin is a reference to Rudolph the Red Nose Reindeer.

Pirate Chief Warrior’s description “I will be the king of the pirates!” is a reference to the popular manga One Piece’s main protagonistLuffy, who exclaims the same phrase commonly.

Keychain Cutlass references the Keyblade from the Kingdom Hearts series of games.

As for Guill’s dialogue:
Saying “open sesame” in the guild hall opens up a secret chamber, which references the same phrase in Ali Baba and the Forty Thieves.

“Yo ho ho and a bottle of Pirate Rum!”

“What’s with all those Golden Daggers?” may be a reference to Frodo’s journey through a cave of monstrous spiders in the book The Two Towers of the Lord of the Rings books. The golden daggers are the only t5 weapon to drop in the Spider Den and this might be due to its likeness to the short blades that the hobbits wield in the stories.

“And don’t forget your hat and whip!” is likely a reference to Indiana Jones who is characterised by those two items and is also an avid treasure hunter.

“These Vampires are dangerous and not glittery at all!” and “Lord Ruthven can’t be a real vampire, he doesn’t even sparkle!” from these two respectively are references to how vampires sparkle in the sun in The Twilight Saga.

“Will the real Puppet Master please stand up?” is a reference to the lyrics of the song by Eminem: “The Real Slim Shady”.

“Better put on the Spider Dance for this!” is likely a reference to the soundtrack Spider Dance in the game Undertale.

“Let it go, let it gooo… please end me.” is a reference to the song Let It Go in the Disney movie Frozen.

“Whatever you do, don’t use those pickaxes to dig right under you!” is a reference to the popular Minecraft phrase and advice “never dig straight down”
On that note,

Miner Warrior’s description “Mine White Bags before Diamonds!” could also be a reference to Minecraft,

“Oh, no! Not the bees! NOT THE BEES!” is a reference to the scene in the movie The Wicker Man.

“Apparently Forax is home to an elusive lifeform called a Bermugulan Slagvork. I hear they’re pretty slow, though, so you shouldn’t need to worry.” The slow Bermugulan Slagvork is a reference to a line in the game Crash Team Racing.

Half of these are so obvious I never thought of them

3.png852x78 5.74 KB
Reference to Rudolph the Red-Nosed Reindeer (A toy is never truly happy until it is loved by a child)

Im a reference to the Divine Oryx pet skin.

You piteous cretins! The bees will sue humanity over this! Artemis is a Greek goddess

Nosferatu refers to the titular vampire in the film Nosferatu.

Tesla Coil refers to an invention by Nikola Tesla.

Thought ‘Prodigal son’ was referring to the Biblical story of the prodigal son?

Son quest has been named Prodigal Son since release in 2018

Also, please, put more effort into your ‘evidence’ next time beyond ‘From myths or whatever’ That just shows you don’t really care, and doesn’t actually serve anything to back up your claims.