kinda bs death, had 3 parts of the janus set. Would have been a cool ppe. 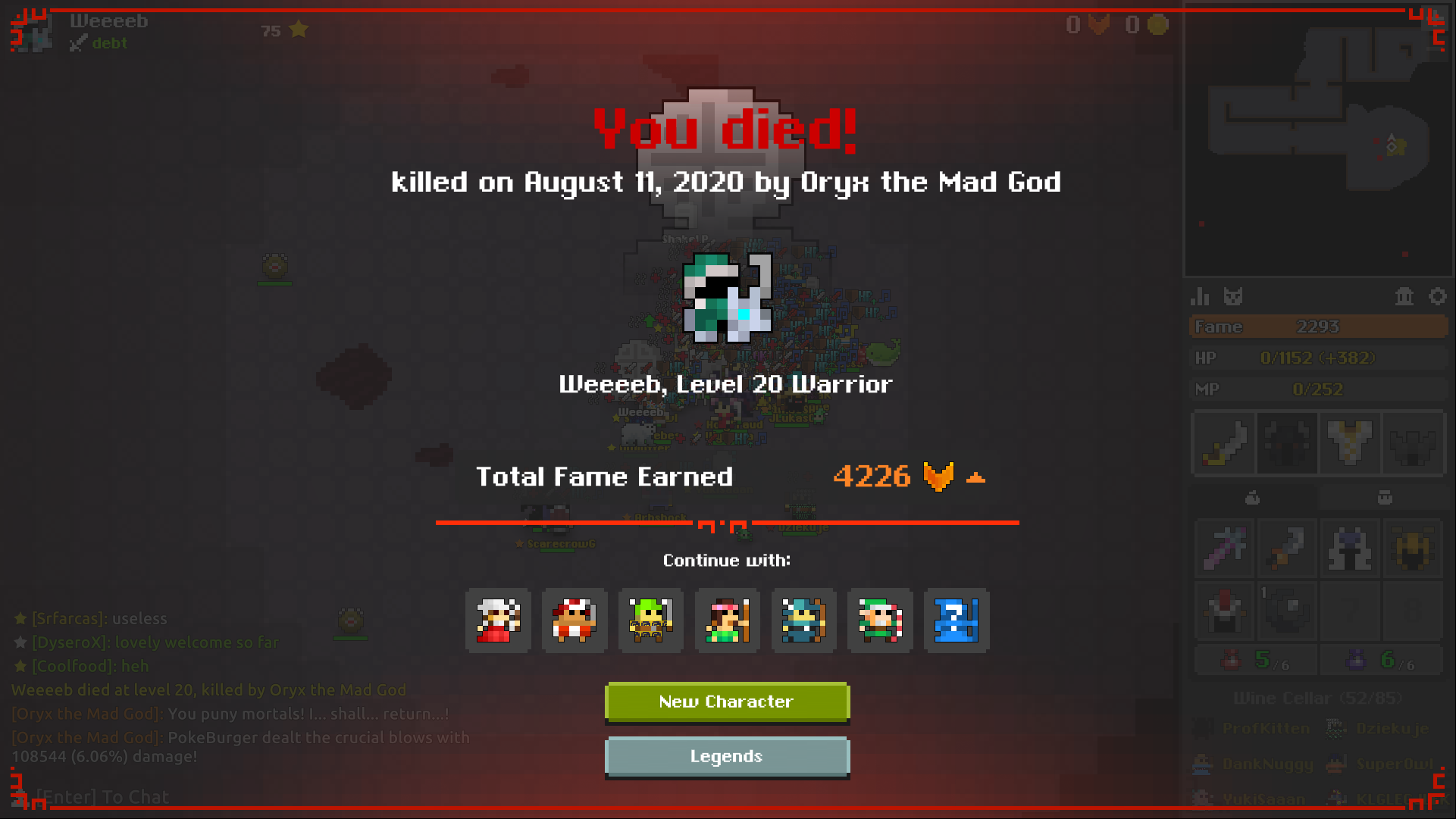 I don’t think this is a good day for me…

I had something similar to this but instead and it was 2 7/8 dying within a week: Daaang, those hurt. Especially the Necro. I almost had a rogue popped by Ruthven a few days ago because I tanked half a shotgun when he reappeared unexpectedly, and I was shocked at how much damage he does! Definitely not a boss I would have pinned for insta-pop potential at first glance. Karma was a bitch for @ICxAlpha… Not to derail the thread, but that’s the first time I’ve seen somebody with that entire set at once! Cool.

It’s definitely a “safe” set, I’d say it’s for safety with the ASS and Scutum and UBDEF, and the MP and SPD contribute to a cowards “run in and stun, but still from afar” outlike, but it doesn’t have very good DPS.

It’s a lot of fun to play. The damage, def and stun ability of a Knight, without the slowness. Makes rushing fun and easy. The only weakness is low HP for a Knight; def saves you from most things but it makes armour break especially dangerous. Still on Flash so can’t try it out against O3, but not sure I want to given it’s irreplaceable.

Why… Why would you use these under level 20?

Fr tho. I was once in an abyss and there was a lvl 13 wizard with cult staff, tablet,
Anointed and crown. The rusher dragged a bunch of stuff behind him, and the wizard got rekt. I would not use uts on a char until 6/8 usually and sometimes don’t even play on a char til 8/8

Fr tho. I was once in an abyss and there was a lvl 13 wizard with cult staff, tablet,
Anointed and Crown. The rusher dragged a bunch of stuff behind him, and the wizard got rekt. I would not use uts on a char until 6/8 usually and sometimes don’t even play on a char til 8/8

Good thing you learnt your lesson. I made this mistake myself one time when I was a noob.

Back in January, I popped a Epic Quest Chest from Daily Reward and got Ring of the Nile as my first White Bag (no clover or loot potion used). Sure enough, I made a noob decision of using it on my not-so-potted level 20 Wizard (basically everytime I get a pot, I chow it down instead of saving it)… until he got popped by Limon. After losing my 1st White (and 2 tops), I learnt the lesson of using my white bag items/STs/modern tops at least 4/8 (ATT, DEF, DEX and SPD maxed). Heck, I use old tops even for 7/8 when I can’t afford the modern counterparts.

Despite of this, there are players who are still making that grave mistake.

I happened see a Ninja @ USW3 a day ago using Masamune right at level 1. I warned him that using tops this early is dangerous because he may die untimely before reaching to level 20 and it will be a big loss. Sure enough, I saw him again couple hours later… being empty-handed (basically he died with that Masa).

Good thing I have spares of Ichimonji and Roc Armor, gave them to him and told “Those will get you started, so if you die again, it won’t be a big loss.”

So this is why everytime I make a new character, I use the spare equipment that I have collected before. They could be T9 weapons, T4 Ability, T10 Armor and T4 Rings (I use Para DEF/DEX/MP/ATT simply because the fairly high demand of HP rings).

I have more to say but that should be it for now. Raiding Lost Halls for the 3rd time, but was not so lucky. I slapped the R key, but apparently I did not apply enough force. Yep, that’s my farmer right here.

Lost that Spirit Staff and Annointed Robe. What else I learnt? Never send a farmer to raid an endgame dungeon.

Imma grab my Boots Mundane Thirsty Necromancer to do the farming for the next 4/8 farmer.