… and then, it happened. 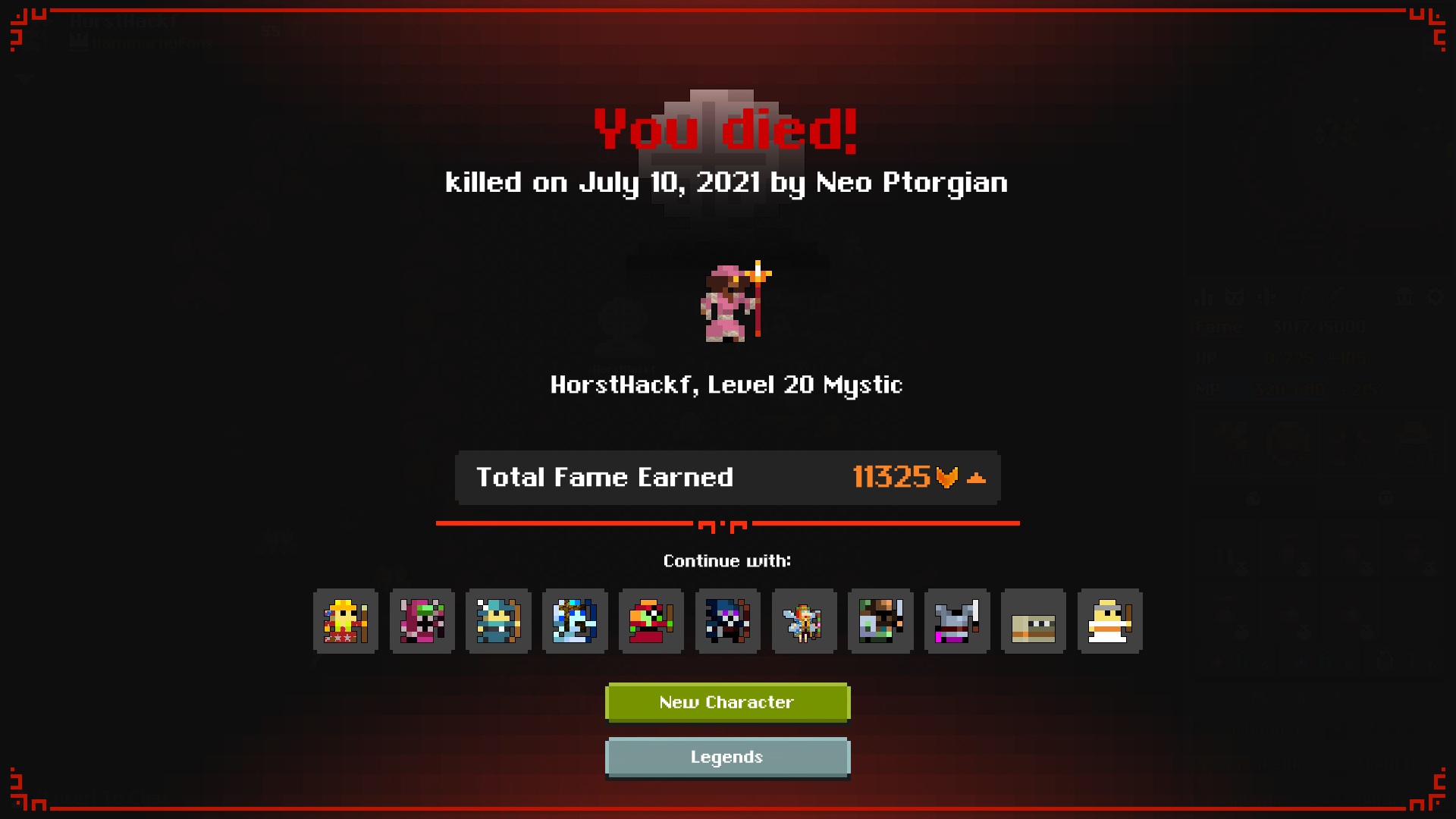 time for a ranged char!? u got popped in an alan dungeon? Looks like a skill issue to me.

Not a skill issue, an attention issue. with a cup of tea in one hand

at least you didn’t lose anything.

Image, there are people who only play for fun and relaxing.

otherwise… why are you playing then?

to get dopamine when i get white bag Just me being stupid and thinking I could survive in a public shatters someone popped in the Nexus. “Might as well do one last one before they rework the whole dungeon.”

Got darkness/confused and then ice sphere jumped on me.

I think I had been doing discord raids for so long that I had forgotten how dangerous those were.

An (in)glorious death in full view of the (alien) world I swear Golden Sphinx needs nerf. Getting insta-jumped by that is painful.

nah. it’s kind of the same thing with WLab, just move backwards; it will move into your shots.

Also rip to that guy, lost his chipper.

Other than that, me died to Heaven + Fury Jump while try to spam my HP pots. I never see u in any discord… hmmm

Another O3 death and this one… ran out of HP pots. ONE OF THE MOST SCUFFED O3 I EVER DONE!!! If you guys haven’t done an O3 yet, or are not familiar with O3, or just not comfortable without RL calls, DO NOT DO ONE WITH TRL (Unless the TRL is an RL in another server), ESPECIALLY ONE THAT DOESN’T MAKE ANY CALLS!!! You can’t really blame them, but don’t apply for TRL if you’re not comfortable with leading it.

We had Leucoryx! Easy, right? Yeah. Really easy, but some dumb fucking trickster (I’m not joking, it was not me) decoyed INTO THE GROUP. I cannot stress this enough. PLEASE DO NOT PLAY TRICKSTER IN RAIDS WHERE PEOPLE DEPEND ON YOUR DECOYS IF YOU CANNOT DECOY PROPERLY. I almost died to a fucking carrot. Imagine the shame, dying in Leucoryx… and not even to the candles, to a fucking carrot. During Leuc’s second rotation phase, TRL did not call orbs, and, well, we got countered. This is the first time I experienced a Leuc counter during the rotation phase. It wasn’t hard at all, but people got parsed.

And then during the actual O3, my GOD. The group was already scuffed up from the Leuc, and the TRL really needs to make calls. I know the splendor safespots, but not everyone does. He did not call them. He did not say to hug walls during outer rotations if you get low. Not a problem. Except he nexused AFTER celestial! How do you nexus after celestial?? So the real RL took over, and then he died (Arturrsrs). And another RL took over and we won. decoyed INTO THE GROUP

with minions or with boss. IMO if it was boss I don’t think that would be much of an issue, it’d just be pretty annoying