What no who dis guy

dunno, I just typed in “Demonseye” in the search bar lol

but then again, i dont regret it:

I do not regret it too

I can’t reply to the topic, I think thats b/c its in #news instead of #news:developers-corner

@Shatter Welcome to the RealmEye Forums

How dare you remove the iconic flag, never dismissed it after 1 year and half

Glad you didn’t because I would not have caught that!

put it back up. I had overwritten it with the end of flash topic but decided it looked way to ugly as a banner and opted to globally pin it instead.

I’ll hand it to that game that it’s certainly the tiniest bit better than cookie clicker, though; reminds me of a cross between that and the automatic rpg simulator from Windows 93 (who remembers that mildly delightful nonsense XD)

played it a while back, got all the upgrades and awards other than the “leave running for an entire month” award, then stopped. now that you’ve reminded me it exists I might consider wiping my save and starting from scratch since it’s been so long I’ve forgotten all the humorous flavor text to hunt through so it might be worthwhile

Obviously that is the game I’m most proud to be associated with. /s 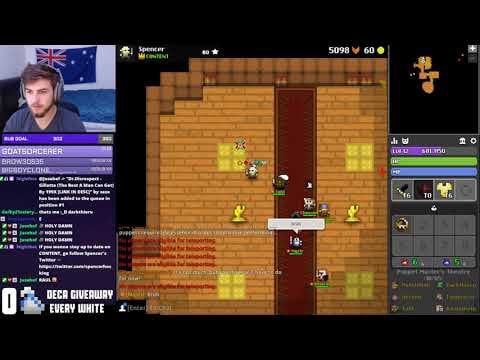 @Unicorn is that true that you were banned for an OBS bug ?

Guildie said it was from facebook, can anyone check? Also, thank the heavens, I needed that cem event.

Oh good. No cem confirmed though

@DeeBomb Regarding IC/OoC - you’ll have to keep in mind that the heal cooldown is only in affect during IC. With its base duration, it’s likely to run out before the interval of lower-level pets…if that makes sense?

So let’s say that we take a maxed common pet. The delay between its heals is about 3.82 secs. When hit during IC, this is increased to 6.82 secs (given the current numbers); however, you’ll already have some vit to reduce the base duration of 7 seconds, so let’s estimate that the character has 25 vit (a high roll or someone having drunk a few vit pots on a fresh 0/8 character that has a “standard” vit growth").
In this case, that translates to a second less of IC (5 vit = 0.2 secs less), so 6 seconds…which means that it’ll run out before the interval is done!

Now, I’m not entirely sure how that would work, but I suspect that it’ll then heal you already.
In addition, with this in mind, the change decreases the effective regen of Rare and higher rarity pets relatively more, since +3 seconds to 1 second is quadrupling the cooldown, rather than nearly doubling it for a maxed common pet.
Conversely, a maxed common pet translates to about 30.5 vit, while a maxed Legendary translates to 404.9, and a maxed Divine to 750. Meanwhile, a maxed character’s vit is usually around 40; as the regen from vit (not vit itself!) gets doubled, the IC interval-increase has much less of an effect for those lower-end players (where their pet is about as strong as their vit) than the higher-end players (where their pet is well over 10x or even 18x as strong as their vit).

I know, bunch of numbers don’t mean everything, so if there’s a public testing sesh for the system again, be sure to get a proper feel for it.
The last one had mostly people negatively theorizing about it while refusing to actually test it…

That’s… really depressing, actually. I don’t plan to be on the testing servers anytime soon anyway, but that sounds miserable