TL;DR: Joined UGC, left UGC, did contract work as artist year(s) later (mainly for dungeon reconstructions), now inactive again (working elsewhere + college, software dev).
This post is just to share some sprites that didn’t make it into the game, either because I couldn’t finish them/didn’t like them, or I did finish them and thus these versions are outdated.

They aren’t leaks, just something neat I think. Enjoy

A WIP of the King’s reflect attack (left). Those spinning crystals were really annoying to animate

Teleportation WIP. Overall I ended up getting pretty inspired by… Kirby of all things (mainly the demonic final bosses)

Basically a combination of the side/front sprites we have in-game now. Also he had differently colored magic in this version

Before we had the King’s shades, we thought about giving him a clone attack (similar to the crystal prisoner). The skull explosion now used for the Avatar was originally meant for the clones

Completely unused, since the Archmage has proper casting animations now and he remains stationary

I wanted to give the Archmage’s birds a despawning animation, but it was pretty low priority so I focused on other things

WIP Magi generator. I was pretty happy about those spinning parts

I wanted the Megamoth boss to visibly transform (rather than just doing the ol’ warning flash), but time constraints

I had a pretty mean idea for the Crawling Depths. We decided against it since we already had the golden egg t-room

An old set from the Kabam era, anyone remember? Drafts for the daeva trickster set The MERV used to be a little RC car, also some resprites/set item drafts

When the Forest Maze got some new items, I had an idea for a set. Didn’t think of the stats though

Nut resprite. The one on the right was my initial draft, but felt too much like an ST skin. This was just an experiment, Tomb rework never really happened

Different stages of the filter machine from Toxic Sewers This should’ve been in the game really

Aaand that’s about it. As stated at the start of the post I’ve been occupied with other things, and in terms of pixel art I kinda want to move on anyway
I always found the behind-the-scenes stuff interesting though, even if this barely scratches the surface

Oh damn, epic to know you were on the UGC for a while and were responsible for some of the sprites we see in the game today! The work you’ve done has been truly remarkable, your sprite animations have breathed new life into many of these bosses and entities for sure~ Resprites also look sick too!

Wherever your creative journey will take you, I wish the best for ya in college! Thanks for sharing all these behind-the-scene pieces with us~ ^ u^b

Ghhhh, damn you, deadlines! This would’ve beem gorgeous to have!

Oh dang, I just remembered that the Forgotten Ring sprite is actually an edit of one of the sprites from above

Glad to be of service! And yeah, I wanted quite a bit more out of the Woodland environment in general. At the start I had this idea that we could go for a nature vs. technology theme (because of the Mechanical Squirrels), but the scope (at least art-wise) had to be reeled in a bit.

Also there was a thought about adding an autumn version of the Ent God there, I forgot why we didn’t do it 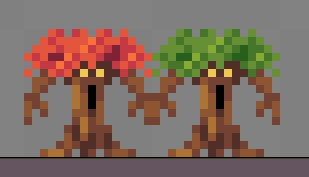 Thank you for sharing these, incredible work! Goodluck in college and working as a software developer, hopefully we might see more of your art in-game.

hmmm… (older sprite I made a few years back!)

I always got excited seeing everything you made, your art is and always has been astounding. Thank you so much for the work you’ve done on the game and best of luck to your work in the future <3

These are so pretty! I particularly like the aether orb animation and WLab boss transformations. I’d love something like that to be in the game.

Also there was a thought about adding an autumn version of the Ent God there, I forgot why we didn’t do it

If memory serves, I think this came down to the base Ent God behavior (wide spreading shots) not really meshing well with the confined areas of the dungeon. In hindsight it probably could have taken more liberties from that design and still been able to use the sprite. WLab could certainly have used some bolstered enemy variety, but… well, I doubt I have to remind you how much WLab/CDepths got rushed.

Still adore the nature vs. technology concept, would have loved to explore that in a new dungeon someday. I think those tesla coils eventually got morphed into the Shatters puzzle towers, right?

well, I doubt I have to remind you how much WLab/CDepths got rushed.

The curse of game dev

Still adore the nature vs. technology concept, would have loved to explore that in a new dungeon someday. I think those tesla coils eventually got morphed into the Shatters puzzle towers, right?

Yup! Can see the new coil as the spiritual successor for this idea

These are super cool!!

I can’t believe you didn’t include The Forgotten King on his floating throne sprite, that was another pretty good “meme” sprite.

I always found the behind-the-scenes stuff interesting though, even if this barely scratches the surface

I’m really glad you’ve been able to share some of those sprites with the public rather than have them lost in some internal chat never to see the light of day.
There’s a lot of behind the scenes material and stories that I’d love to share myself, but simply cannot.

I still wish we had been able to work on a brand new dungeon together but the opportunity sadly never really came.

I can’t believe you didn’t include The Forgotten King on his floating throne sprite, that was another pretty good “meme” sprite.

What do you mean, that totally made it into the game!

Triple sunglasses Malphas, on the other hand… now that I regret never getting implemented.

HOW COULD I FORGET

Man I wish these were in the game

thanos king
(haha whoops, that’s a bump. A worthwhile one, though!)

I’ve one more thing I suppose! A long while ago I was working on revamping the tiered item sprites. This wasn’t an internal request, but something I eventually wanted to propose to the team (kinda like how the default skins were originally just an experiment, but were then later requested as a deliverable) We already have new bow sprites now, so it’d be neat to see the rest updated as well, eventually