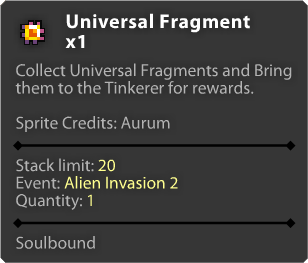 I’m glad i stored my red alien core and my locked reactor.

After hearing Realm is about to change (#RealmExalt), Commander Calbrik plotted a malicious scheme to destroy the Realm before it became more powerful. This might be the last time we see Realm as we know it… We hope you are ready for the battle…

Remember the Universal Fragments? Those will once again be the key to unlocking treasures beyond belief.

How to gather those tokens?

Defeating the following enemies will grant you different amounts of this precious fragment:

Where can I find those wormholes and enemies?

We also added a twist - once you complete any of the wormholes, there is a chance another wormhole’s portal will spawn, so don’t rush to leave the “planet” dungeon after you’ve defeated its boss!

In the meantime, you can always pop one of the new Wormhole Enchanted Keys! They have no restrictions as to where you can open them. Limit per wormhole is 25. They can be purchased in the in-game Mystery Shop.

Here is what the Weapon Caches can drop:

If you open the in-game Mystery Shop, you will have a special FREE Welcome Back Gift! Have you told your friends about what’s coming and what they can get for free? What are you waiting for?
EDIT:

To boost the last days of the Alien event, we are adding two new quests:

The extraterrestrials are just about ready to throw in the towel and return to the depths of space, so grab their goods while you still can!

They called me a mad man

The small (for now, might get promoted to the top line nearer the time) graphic for the event from the lower right panel of the news section: The Welcome Back Gift: …I presume it won’t take you past max stat caps (?).
Don’t know what the Permanent increase XP means, maybe gives you a flat amount of extra base fame (XP) for that character upon using it?
Edit: ah okay it’s for welcoming back returning players so the XP levels them up straight to 20 and it also gives them a boost equivalent to 5x of each pot.

I kept 3 of them. [universal fragments]

They called me a mad man

Probably does the same thing as potion of max leveling and grant you the xp needed to reach level 20.

I can finally enjoy a new entropy priest. Because back in September, when i finally managed to make a full entropy priest 8/8, with a puri, using the help of my main character, i decided to give my priest a try in a parasite chambers. Lag oof’ed me into two tongues - i lost days of work to lag.

You need in total 240 fragments to craft the Entropy Reactor.

Since i already have the red core and the locked reactor, this number is greatly decreased, leaving me in a 120 fragment quest. I’m happy.

That would make sense as the bit about level 20 isn’t in yellow text, so the XP line must be to cover that. What class should i put entropy on ? I have every alien armor and every alien weapon except a few ones - but i can grind them.

I remove classes that i don’t really want to be playing with.

I don’t seem to see the welcome back gift. Perhaps I’m missing something here?

Reading it a bit closer, each Wormhole dungeon now only gives maximum 1 universal token (each miniboss gave them in the last time there was an Alien Event), and that’s only from the satellite, so failure is not acceptable.

Though the portals themselves should be easier to find, with keys, and the chance to continue into another portal after completion, and there is the Alien Leprechaun too. So might not be too much slower to farm them. Don’t forget to call him a man.

The moment I decide to clean my vault of these things.

I actually suicided my huntress to make a new priest.

Don’t worry, only a backpack and a potion of max level suffered in this process.