RIFTS - Fall of the Forgotten

Fall of the Forgotten was the first RIFTS season released (not including Warm Up) and went on from September 27, 2019 to October 1, 2019. Players are limited to making 5 characters in total for this season. The level cap of pets is set to 50 (Max Uncommon). All the dungeons available for this season are limited to those that released during the Wildshadow era. 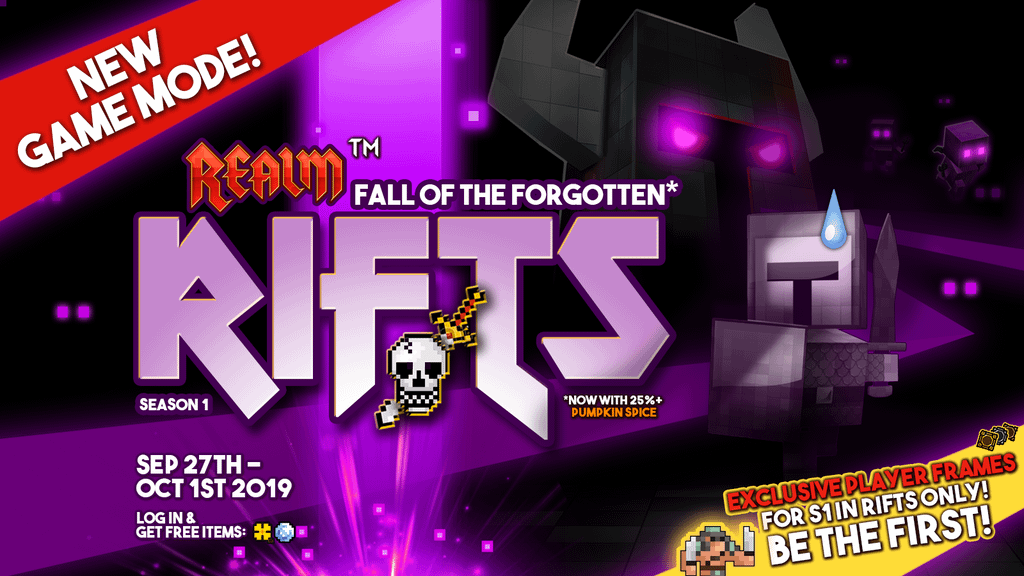 There are two quests available for the duration of this rifts season. The Tunnel Rat quest is the same one as the Warm Up Rifts.

During this rifts season, there was an ongoing community event that gave out rewards to everyone depending on how many players completed the Tunnel Rat quest.

Following changes have been made to drop rates and items:

The dungeon selection for this rifts season has been limited to pre-Kabam era.

Just as you finish your stale horn of mead and exhaustedly make your way over to your pet yard to feed the black wolves a young rogue unveils himself from the tree line, exhausted and out of breath he steps onto the bridge and blares from the bottom of his severed lungs:

“Heed fellow prisoners of Oryx, be quick - the sinister prophet once more seeks to extinguish any spark of uprising in Realm. Oryx has forced his obeisant master of the dark arts Lord Ruthven to twist the very fabric of space and time and is now capable of conjuring a dark portal in the Realm. This portal has opened now! It is a gateway to unseen horrors pouring into this world we just coped to make our own. We are run over by hordes of evil powers we are only beginning to understand.

Even though it is a ludicrous attempt to stop this onslaught, you and your fellow captives have to aid me to try the last and only option available to us reverse our inevitable destiny of death and torment - you have to round up everyone and anyone still capable of holding a wand and a sword and make your way with me… through the portal … to the other side…”.

Still processing this cryptic call you hastily grab your strongest black wolf by the collar and drag him with you and a mob of old heroes and follow the rogue into the forest. On a clearing you reach a sky high vortex spewing hordes of creatures you disintegrate as you make your way forward. Having reached the centre of the vortex pulsing with strange magic you take a heart and step through it to the other side…the magic strips away every molecule you and your wolf are comprised of and you enter an ethereal state of consciousness.