The Wine Cellar is a high-level dungeon that can be accessed after defeating Oryx the Mad God in Oryx’s Chamber. Upon Oryx’s defeat, he will drop a Locked Wine Cellar Portal, which can be unlocked with a Wine Cellar Incantation (or “inc”), an item that drops from most dungeon bosses. The portal will unlock if someone uses an Incantation close to it.

The Wine Cellar is one of the few sources of T12 Weapons and T13 Armors, as well as T6 Abilities. It is also the main drop location of the Tome of Holy Furor as well as the Oryx’s Battle Attires Knight ST Set. Minions can also drop public bags containing Wines, like at Oryx’s Castle.

Once the boss of the Wine Cellar has been defeated, three monuments will spawn in the middle of the boss chamber. Using all three Oryx Runes will activate the monuments, opening a portal to Oryx’s Sanctuary. 
All players will randomly spawn in either the top or bottom right corner, and Oryx is in the large room on the right. 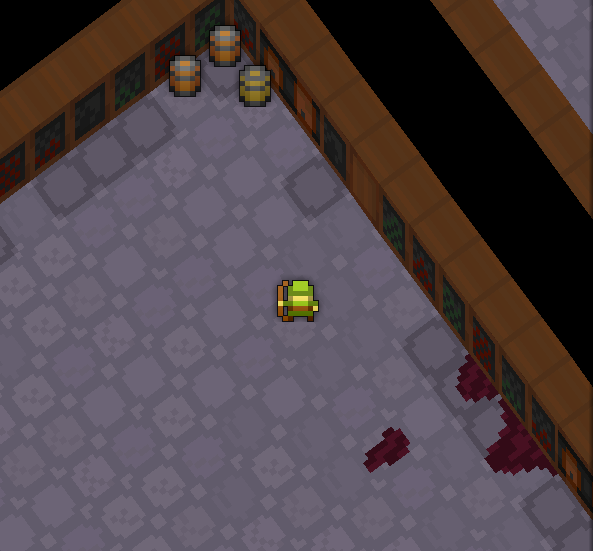 Wine Cellars (WC) are very likely to be opened in most crowded realms. Most players will rush past the enemies in an attempt to reach Oryx 2 quickly.

It is highly recommended that you have maxed speed or/and defense before attempting a wine cellar rush. Do not attempt to rush on an unpotted character unless you really know what you’re doing, or are willing to lose your character.

Most shots by the minions can be tanked and/or ignored (even on a robe class) as long as you don’t dive heedlessly into a mob. There are, however, three shots you should watch out for:

Most of the minions clump fairly close together, so you shouldn’t have too much trouble avoiding the mass of them. Sticking close to walls is often a good idea.

This section contains historical strategies for WCs and do not apply to the current state of the game.

Wine Cellars were very rare occurrences when the dungeon was first released due to the rarity of Wine Cellar Incantations. The item is much more common nowadays, causing a Wine Cellar opening to be taken for granted in crowded realms.

“Private” WCs, in which the Incantation holder hopes to open to a select group of players, represent a full-fledged operation and are virtually nonexistent nowadays, but were more common shortly after the dungeon was initially released nearly a decade ago. When they do, scouts will scour servers and realms, looking for small-population (~20-30 is optimal) realms that are close to closing - i.e. on ents or liches. The entire WC group, including one person who carries an incantation (the “inc holder”), will then enter, closing the realm as fast as possible and possibly hiding in dungeons or tutorials so as to not draw attention. After Oryx 1, the incantation will be popped - often after a long pause, in the hopes that people will nexus, and occasionally with one or more diversionary pirate caves opened at the same time to trap unsuspecting randoms and prevent them from entering the WC.

Historically, players would clear out most enemies instead of rushing past them. In private Wine Cellars, players would stop moving right before Oryx’s room and allow certain classes (ex. Rogues) to get soulbound damage on Oryx first, ensuring that everyone in the group had an opportunity to deal soulbound damage. Due to the rarity and expense of Incantations (worth > 40 Potions of Defense before increased drop rates and item duplication exploits made them fairly common), it was expected that players “donate” to the Incantation user after Oryx 2 was defeated, especially if they received a good drop.

Many of these strategies were later used for Oryx’s Sanctuary before the rune drop rate was buffed. Link to unlabeled version of map