Manor of the Immortals

The Manor of the Immortals is a medium to high-level dungeon designed for fairly powerful (level 20 with defense maxed) characters.

The dungeon is a source of Potions of Attack, Holy Water, the Purified Priest UT set, the Vampire Rogue ST set, a unique Bat Egg, and a necromancer skin.

Entrances to the Manor of the Immortals are guaranteed to drop from Kage Kamis, an uncommon enemy found in Dead Forest setpieces in the Highlands.

This dungeon must be completed to earn the ‘Tunnel Rat’ fame bonus.

The Manor Key is available in the Nexus for 50

See the Manor of the Immortals Guide for a complete walk-through on the dungeon and all its enemies.

The dungeon is a large mansion with several rooms connected by hallways. Each room is a randomly chosen premade setpiece, but the layout is procedurally generated. Rooms contain dark blue, blue-gray, or purple brick floor tiles. Dark red carpets are found in many rooms. Wall tiles consist of dark purple stone, dark blue walls with paintings and windows, or bookshelves. Flashing lightning can periodically be seen from the windows. The dungeon is decorated with candelabra near the edges of rooms. Some rooms resemble a prison, with bones and pools of blood near the cells.

There are always 9 rooms between the start room and the boss room, not counting either. There is a high chance that at least one treasure room will appear in a Manor instance. Often, two or more treasure rooms will be present. Some wall bookshelves in certain rooms can be damaged and destroyed. Doing so will reveal a secret chamber containing 2 Coffins and 4 Bald Vampires.

Attacking a coffin can only have 1 outcome, as it will spawn Vampire Bat Swarmers and Lil Feratus when its health is sufficiently depleted. In addition, it have a chance of dropping Potions of Attack, Holy Water, and the unique untiered loot in the dungeon.

Note that the central bookshelves in cross-shaped rooms with purple floor tiles and red carpet can also be destroyed. However, doing so will only reveal a small chamber containing a Nosferatu and no coffins.

Coffins can occasionally be found in regular rooms as well. Example of coffins in a non-hidden room: 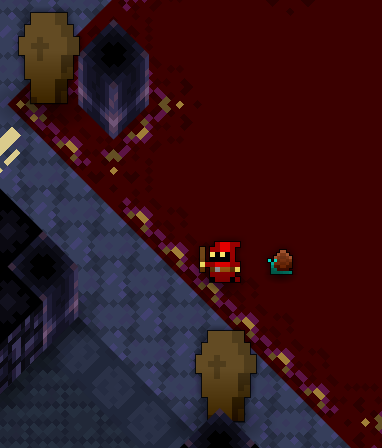 Lord Ruthven will be found in a large room at the end of the dungeon.

The Manor of the Immortals is part of the Standard Quest pool from the Tinkerer and has two associated quests.

A complete guide for the dungeon can be found here.

Treasure rooms can easily be identified by bookshelves that do not have a shadow with the floor.

The dungeon is a heavy source of the Confused status effect from Vampire Bats, a very common enemy. This can be dangerous for weaker characters especially if they are confused into a swarm of enemies. On the other hand, this dungeon is a good place to practice confuse controls because it is still relatively non-threatening compared to higher-end dungeons.